States Where Lane Filtering Is Legal

In recent years, a handful of states have legalized the practice of lane filtering for motorcyclists, and several more states are working toward it. While lane filtering can be a controversial topic, several studies support it as a safer way for motorcycles and other motor vehicles to share the road.

What is Lane Filtering? 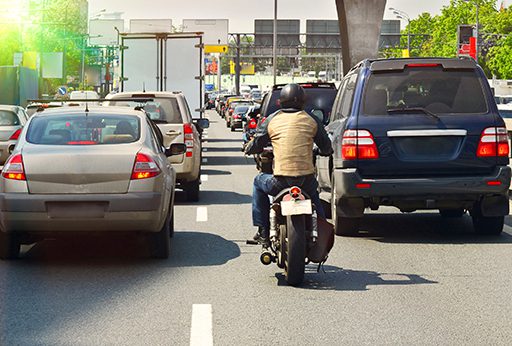 Lane filtering is a lane sharing technique that allows motorcyclists to pass between cars traveling in the same direction– typically when the cars are stopped and the motorcycle is moving at low speeds. Four states have changed their traffic laws to allow lane filtering, and several others are considering passing legislation to allow it.

What Is the Difference Between Lane Filtering and Lane Splitting?

The terms “lane filtering” and “lane splitting” (also called white lining or stripe-riding) are often used interchangeably, although there is a difference between the two– a big difference, considering that lane splitting is only technically legal in one state.

While lane filtering generally refers to the practice of motorcycles moving between stopped or slow-moving vehicles, lane splitting allows them to share lanes with traffic moving at normal speeds.

Where Is Lane Filtering Legal?

As of October 2022, five states have legalized lane sharing of some kind. The conditions under which a motorcycle rider may filter between cars vary from state-to-state.

So far, California is the only state to make lane splitting legal. When splitting lanes, bikers should not ride the white line faster than 10 mph above the speed of surrounding traffic. Lane splitting is also discouraged when traffic speeds are higher than 30 mph.

Lane filtering is allowed in Utah under the following conditions:

In Montana, motorcyclists may split lanes to pass slow or stopped vehicles as long as the biker is not traveling faster than 20 mph and traffic conditions make it safe to do so.

Bikers may filter between cars in Arizona under the following conditions:

Motorcycle riders in Hawaii may use the shoulder of the road to pass stopped traffic on roads with at least two lanes of traffic. Because Hawaii’s roads tend to be narrow, motorcyclists may not travel between two lanes.

In all states, it is the motorcyclist’s responsibility to ensure that the maneuver may be made safely before riding the white line.

Eleven states have no lane splitting laws that prohibit the practice, so it is technically not illegal. However, you may still be cited for changing lanes improperly or driving recklessly, particularly if you are involved in an accident. States without laws regarding lane splitting or filtering include:

Washington DC also does not have laws pertaining to lane splitting.

Lane sharing of any kind is expressly prohibited in 34 states, including New York and Florida. However, a handful of these states (Connecticut, Massachusetts, and Oregon, to name a few) are considering or have considered passing legislation to legalize the practice.

What Are the Benefits of Lane Filtering?

More and more states are putting forward legislation to legalize motorcycle lane splitting or filtering, thanks to studies that have found the practice is generally safe. One study in particular, done by the Safe Transportation Research and Education Center at University of California Berkeley, found that there are several benefits to lane filtering, as long as it is done safely.

Motorcycles who do not lane split take up the same amount of space as a passenger vehicle. Lane-splitting riders allow more space for cars, easing traffic for everyone around them.

Lane filtering at stoplights can shorten lines at the light, allowing more cars to get through on green and keep traffic moving more efficiently.

The study by UC Berkeley found that lane splitting and filtering can actually increase motorcycle safety. Some of the leading causes of motorcycle accidents are failure by motorists to give bikers sufficient space, and failure to see motorcyclists. This often leads to rear-end collisions in heavy traffic.

When motorcyclists are allowed to keep moving through traffic, it may decrease their risk of being hit from behind, the study found. It also found that injuries from lane-splitting accidents tend to be less serious than those sustained in other types of motorcycle accidents.

Some motorcycles rely on airflow to keep their engines cool. In hot states like California and Arizona, the ability to keep moving through stop-and-go traffic can help prevent these motorcycle engines from overheating.

When Is Lane Splitting or Filtering Unsafe?

Lane sharing must be done correctly in order to keep motorcyclists and other motorists safe. Violating motorcycle laws or otherwise engaging in unsafe behavior negates the benefits of lane splitting and filtering.

Motorcyclists should only practice lane sharing in places where it is legal. Doing so in states where it is prohibited may catch other drivers by surprise, increasing the risk of an accident. It is always good practice to behave as predictably as possible on the roads in order to avoid an accident.

The UC Berkeley study also found that large speed differentials between motorcycles and other vehicles dramatically increase the risk of injury. Lane sharing is generally safe, the study said, when traffic is moving no faster than 50 mph, and when the motorcycle is traveling within 15 mph of the speed of surrounding traffic.

How Can A Motorcycle Accident Lawyer Help Me?

If you have been involved in an accident with a negligent driver while motorcycle riding, a personal injury lawyer can help you navigate the next steps in your recovery. The motorcycle accident attorneys with The Advocates have decades of experience representing accident victims and helping them obtain fair compensation for their damages.

When you hire an Advocate, you get fierce representation and thoughtful, compassionate care. Your attorney will help you:

Our legal team is standing by, ready to listen to your story and get started on your case. Contact us today for a free consultation. You deserve an attorney who truly cares about your recovery. You deserve an Advocate.